“Butler leaves CBL stronger than ever.” 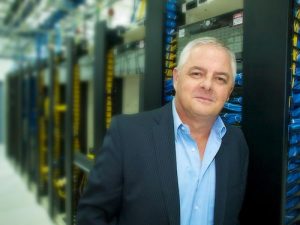 Cable Bahamas Ltd. announced today that after almost twenty years with Cable Bahamas Ltd (CBL), Mr. Anthony (Tony) Butler will retire from his post as CEO and President of the Company effective June 30, 2018. Mr. Butler has been at the helm of CBL throughout its growth years as it has become ubiquitous throughout The Bahamas serving tens of thousands of customers, bringing innovation and world-class telecommunications service and becoming established as one of the economic stalwarts of the country.

Mr. Butler’s career at CBL since joining in January 1999 has been meteoric, rising from Vice Pres-ident of Engineering to become President and COO in 2003 andCEO in 2010. He leaves the Company at its height with record revenues, consistent profits, overseas expansion and a diverse portfolio of products and services.

“It has been a fabulous ride,” said Tony, “with a great company, wonderful colleagues and in a terrific country. I have always tried to put customers first and provide the best services to The Bahamas. I think we’ve managed to do that over the years.”

During his outstanding CBL career, the Company has quadrupled revenues, added and launched REVON (Broadband Internet) and REVOICE (Voice services), andbuilt out Caribbean Crossings, thecompany’s state of the art submarinefiber network linking the principal islands of The Bahamas with Florida. Tony was also the leader in initiating and executing the successful rebranding of the Company. This moved CBL into the REV age with a dynamic new look and a bold, progressive strategy.

More recently, Tony’s achievements have included the Company’s positive expansion into the US telecom market with the acquisition and merger of Florida telcos into what is now Summit Broadband. However, it will be the move into mobile with ALIV that will be remembered as his crowning achievement. Without question, Mr. Butler was the driving force behind the Company’s successful bid for The Bahamas’ second mobile license. Aliv’s success thus far in The Bahamas’ mobile telephone market has exceeded expectations, winning over 30% market share in its first full year of operation.

Tony will always hold The Bahamas close to his heart. He is a fierce proponent of the country and represents it well as a Board member of Caribbean Cable Television Cooperative and previously as past Chairman and Board member of Caribbean Cable Telecommunications Association (CCTA). “My greatest achievements have been here in The Bahamas” said Tony, “and I am proud to call this my adopted home.” The accomplishments of the Company over the years have not only provided strength to the Bahamian economy but have also put The Bahamas on the global telco stage.

“The Board of Cable Bahamas would like to thank Tony for his contributions to the Company over the course of his career,” stated CBL Chairman Mr. Gary Kain. “He touched every part of our business and has constantly been a driving force and leader. We wish him and his family all the best as he begins this next phase of his professional career.”